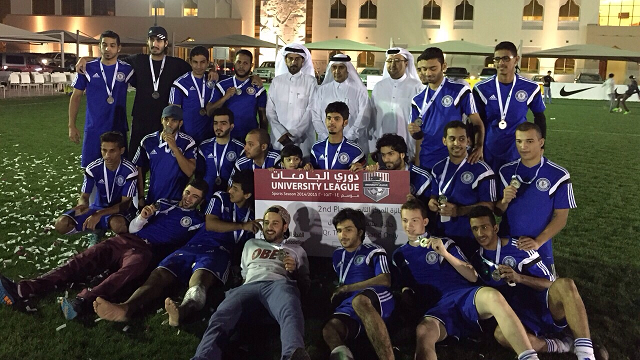 Qatar University football team beat Qatar Aeronautical Academy to be crowned the University League champions after winning 2-1 after extra-time at Qatar Foundation for Education, Science and Community Development’s (QF) Pitch 3. University League is a collaboration between QF and Qatar Football Association (QFA), which brought together 12 universities and colleges from across Qatar to take part in the four-month soccer tournament.

An award ceremony was held after the final match at the QF Recreation Centre honouring the first, second and third place teams, and QFA referees. A number of special prizes were also presented. A dinner was then held to congratulate all the participating teams and the evening ended with a speech from Mansour Al Ansari, General Secretary, QFA and Mohammed Al-Naimi, Director of Community Affairs at Qatar Foundation.

The University League supports Qatar Foundation’s mission to unlock human potential, encouraging, among other things, activities through various projects and programmes, including healthy living through sports. Commenting on the success of the tournament, Mohammed Al-Naimi said: “It is an absolute honour to host the University League tournament as Qatar Foundation is fully dedicated to support the community in showcasing their skills, talent and sporting endeavours to promote healthy and active living. The hard work and efforts of everyone involved has made the event a real success.”

Mansour Al Ansari, xx General Secretary at Qatar Football Association (QFA) said: “We congratulate Qatar University, Qatar Aeronautical Academy, and College of the North Atlantic – Qatar, on winning first, second and third place respectively in the University League this year and thank everyone who contributed to the success of this event. We would also like to congratulate Qatar University, Omar Al Ansari, and Abdullah Abdulrahaman on receiving the Fair Play, Best Goalkeeper and Best Player awards respectively.”

He added: “We thank all the colleges and universities that participated in this year’s league and look forward to next year’s edition. QFA is in line with the National 2030 vision by ensuring greater community participation in football and physical activity.”

The University League this year ran from 30th October until 12th February and had two groups; Group A and Group B, each with six teams. Group A of the league included Qatar Aeronautical Academy, Qatar Faculty of Islamic Studies, Texas A&M University at Qatar, Carnegie Mellon University in Qatar, Weill Cornell Medical College in Qatar and College of the North Atlantic Qatar. Group B included Northwestern University in Qatar, Qatar University, Georgetown University – School of Foreign Service in Qatar, HEC Paris in Qatar, the Academic Bridge Programme and the University of Calgary Qatar.