Qatar Aeronautical Academy celebrates the graduation of the 2016 class 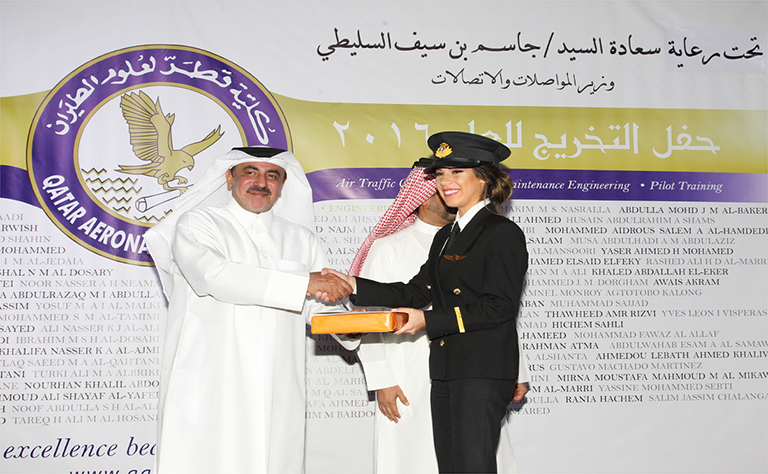 Under the patronage of His Excellency Mr. Jassim bin Saif Al-Sulaiti, Minister of Transport and Communications, Qatar Aeronautical College celebrated today the graduation of a new batch of its students, in the presence of a number of college officials and graduate parents.

The total of graduate students for this year reached 123 graduates, of whom 59 Qatari, and the number of male graduates reached 95, compared to 28 females distributed on aviation specializations in the college, namely: training of pilots, aircraft engineering and maintenance, in addition to the specialization of airport operations management, meteorology and air monitoring, and the first batch of graduates from the security and passports management specialization, which was the fruit of cooperation between the college and the Ministry of Interior.

In his speech at the beginning of the ceremony, HE Mr. Jassim bin Saif Al-Sulaiti, Minister of Transport and Communications, expressed his pride and happiness at this achievement that the graduates obtained by their insistence, diligence and perseverance, saying that: “We congratulate you today on the success that you have accomplished, which qualifying you to be part of the bright future of Qatar.” For his part, Sheikh Jabr bin Hamad bin Mohammad Al Thani, Director General of Qatar Aeronautical College, congratulated the graduate students, saying that: “With your success, hard work and perseverance, it is time to get what you deserve”, stressing that