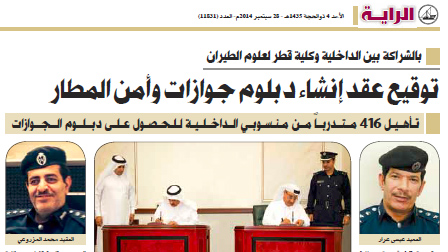 Noting that under this agreement there has been a certified Diploma in Immigration and Security Management which will cover all the needs of the Ministry of Interior for the human resources requirement in this field. Mr. Ali Ibrahim al-Malki, Director General of the Qatar Aeronautical Academy, on his part said, that this diploma enables the students to gain the required qualification under and upon graduation continue to study in the field to obtain a Bachelor’s Degree, pointing out that the diploma which was established by the Academy  for Immigration & Airport Security is equivalent to the so-called co-diploma or university degree medium. The academy will divide the students in the current batch into groups to receive theoretical and practical training for Two years after being discharged to work in the Airport Immigration.

Brigadier Issa Arar Rumaihi, Director of Airport Security said he was pleased with this agreement with Qatar Aeronautical Academy, as this step enhances the role of Airport Security in maintaining Security and Safety at the Hamad International Airport, adding that the training process will Include three phases, namely the establishment phase and stage of specialization and stage of advanced training, and will qualify as Airport Security Personnel to carry out the role assigned to them in maintaining security inside the airport and to maintain the security and safety of passengers, and so they are fully aware of the mechanisms of specialized work, stressing that this Diploma will raise the efficiency of individuals and achieve the vision of the Ministry of Interior in Human Resource work, comprehensive Immigration Employees, Airport administration and Management of Airport Security.